Head of the Technical Publications department in Mobileum, a company that provides roaming management and Big Data solutions for telecom operators around the world, Francis Anthony brought a unique background to his studies with the Global Leaders for Innovation and Knowledge program. As he would be the first to admit, he was skeptical about the idea of nonprofit, community support work that he had seen being done—and often poorly done—in India, so the image that came to his mind made him skeptical. After all, he was working with a software company that creates solutions for some of the largest cell phone networks in the world, and the problem that he was looking to solve—persuading his higher ups to streamline the company’s design of technical information objects and related process workflow—had nothing to do with the nonprofit sector.

However, as the resident of Bangalore explains, one of the first things he recognized—and appreciated—about the program was its many points of difference, even when it came to the term “community.” It started with the program’s application process, as Francis explained, but he also saw that, even in situations that seemed to fit into the mold of the traditional community support environment, there were more many surprises to be discovered.

―What did you make of this idea of “community” when you were filling out your application for the program?

We were required to submit essays that essentially focused on how we planned to contribute to our community—and community is defined fairly broadly; it could be your company as well. The moment that they said “company,” I was full of ideas, because I head my department and there are so many ways in which things can be improved in my department. And that is my community, and the larger community are the customers that we cater to.”

―And as you said, the Capstone Project that you have been working on was related to this idea of improving your particular community.

The Capstone Project runs through the life of this course; in fact, it starts even before the course begins, and it continues on even after the course has ended. So it’s always at the back of our minds. And with everything that we learn, in some way, we need to find a way that we can use it in our Capstone Project.

―How did the different types of classes that the program offered help you address your project?

I rather enjoy the social sciences and liberal arts, and that was my primary driving factor in applying to this program. I was very intrigued by the fact that this management program offered such an extensive curriculum in liberal arts. But I think I ended up learning extensively on the hard subjects, which I don’t necessarily enjoy so much. But I know they’re important for business. So corporate finance teaches you how to focus and how to get hard numbers, which are important whether I like it or not. I ended up learning some of those concepts quite nicely as well. Because, at the end of the day, people care about feelings, but people also care about your business case: can you make a solid business case and can you back it up with numbers, figures, and data? So, this course helped me bring out those attributes to my project, that I can talk to people in my company, not just in terms of feelings, and how I “feel” something should be, but back it up with credible information. 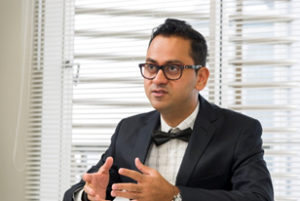 Even when it came to the more liberal arts classes, and even a subject that seems as abstract as philosophy, our professors found ways to connect them with practical business situations. For example, Dr. Nonaka taught us about knowledge creation and management from a philosophical point of view. We also studied philosophy in his course; we were also expected to do a lot of reading of philosophers from around the world. It appeared abstract, but they were able to tie it into business and society, and very current examples. In Dr. Nonaka, we had a first-rate mind teaching us the philosophical aspects of business. And we had Professor Hershock, who was teaching us philosophy in Hawaii. He was able to give us a lot of practical, relevant examples—ways and means by which we could use philosophical frameworks to apply to everyday situations. It was very practical, and not abstract at all.

―How are you planning to bring what you’ve learned in the program into practice back with your work?

One of the main things I learned from this course was to know what your sphere of influence is and work within that sphere of influence, and secondly, build small successes very quickly and use that as leverage once you’ve got the credibility of having delivered output successfully—use that to create more successes and expand your footprint. That is my plan.

―It sounds as if your job is pretty demanding, and being in a managerial role would have made it difficult to get away for three and a half months. 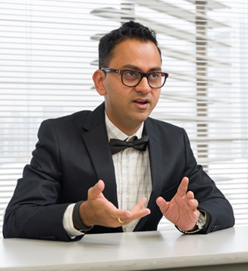 I was nervous because I head the department, and it’s very unusual for the head of the department to disappear for four months. But the good thing is that it was a very well planned program, which meant that I had three months to put a detailed business continuity plan in place, and that is what gave my company confidence to let me go on the program.

I participated in weekly calls with our team and I was updated about the progress that we make. In fact, I ended up doing some unintended business development for my company, because my Hawaii project had me working with the USA branch of a large Japanese telecommunication company. So we were required to come up with a solution for a business problem that they were facing, and my company makes some products in the area of their business problem!

―Given that you feel the way you do about nonprofit “community support” projects, how would you describe your experience observing the Doi Tung Development Project*?

* The project started by the royal family of Thailand with the aim of reducing issues with poverty experienced by the people in the northeastern part of Thailand. The project succeeded in enabling villagers to be self-sufficient as they produce cash crops such as coffee instead of narcotics.

I was initially skeptical, because I have several friends in India who work for the nonprofit sector and I’ve heard their stories; that generally makes me a little cynical about how that sector operates. And I think that cynicism was probably apparent on Day One when I spoke to people there… But at the end of the whole module, I think I had a change of heart because I could see how livelihoods were actually impacted.

At one point there was this lady who was talking to us about macadamia nuts [one of the products being grown and turned into finished goods at the Doi Tung Project], I think. And she was one of the workers, or one of the daughters of one of the workers—and by the way, some of the women who are working at the macadamia nut factory are HIV positive, and they used to be a part of the sex trade. But the factory is a very inclusive environment. She was youngish, probably my age [Francis is in his 30s]. And she wore Crocs. In India Crocs are very expensive, and I would assume that they are expensive in Thailand as well. So I commented to her, “obviously you’re making enough money to buy them” during an informal part of our discussion. And she kind of broke down, and she said that in her parents’ generation, they were leading a hand-to-mouth existence; you know, they didn’t know where the next meal was coming from. But because today that whole area has been transformed, she gets to make these kinds of choices. And for me, that was a vote of confidence in what has been accomplished. Obviously it was a very sensitive topic for her, and my question was very flippant—I was commenting on a sign of consumerism up in the highlands. But for her, it was very emotional.

―How would you compare that to the module in Singapore?

I think some of the smartest lecturers were from the module in Singapore. Very sharp people, very very bright, and their teaching style was highly interactive… I think the members of government in Singapore are very empowered. Especially the young people: the guy who headed a division of the Economic Development Board was around my age, and was highly accomplished… His peers from college are now ambassadors to other countries. You see, Singapore is very small, but it maintains a diplomatic presence in pretty much every country, or the large countries that play an important role on the global stage. And he said that his diplomat friends’ counterparts in other countries are usually much older.

―What was your interaction like with your classmates on the project? How did you find yourself getting along with them?

My classmates were a mix in every sense. They came from organizations doing radically different things than what my organization does. For example, we have a lady who teaches at a university in Vietnam, another who teaches at a polytechnic in Singapore, and a guy who builds dams in Laos. So some of them came from very different backgrounds, and there were also some IT people such as myself. And I think that adds to the enrichment of the program, because everybody’s perspectives about how you apply things that you learn in the classroom are very different. The guy who builds dams thinks very differently from the people who teach at university, or people like me who work in IT. I come from Bangalore, which is pretty much a tech city: everybody around you works in the tech sector, so it gets very monocultural from a business ethics and a style of work point of view. It was very refreshing to have people who do things that you don’t do. 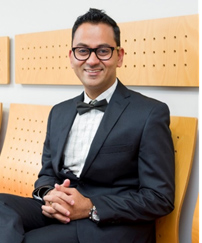 And our nationalities were all very different: we had Vietnamese people, Lao people, Japanese of course, Thai, and Indian, among others. In some cases, we would have different levels of English, but that had to be the shared language of communication. In a lot of the group settings for class work, you had to work very aggressively: within 10 or 15 minutes, you had to discuss, create a presentation, and make a presentation. You had to find a way to communicate, make yourself understood, and still work as a group, not as an individual, and still present successfully.

I didn’t come into the program expecting to make friends, or wanting to make friends. But I think when you put 20 people together, and you force these 20 people to live together in a manner of speaking, see each other every day for many many hours—not just in the classroom, but outside of the class. We did so much group work, and I think that’s a very good thing in this program because it forces you to really mix with people, even people for whom you might say, “well, I wouldn’t want to normally spend a lot of time with this person,” or “I don’t think I get along with this person.” But surprisingly you do get along with them. I feel as if the three and a half months have passed too quickly.

It’s very challenging, and very intense, but totally worth it. Totally worth your effort and time. And that’s just from the knowledge point of view. You also get to make friends from around the world, which was invaluable for me—making human connections. You can study—that’s hard—but it’s even harder to make friends. It gets a lot harder to do that as you get older. So this course provided me the opportunity to make new friends, and I’ll cherish that.