Six years ago, a stint with an international development organization in Indonesia changed Desiree Tilaar’s perspective about her country. She came to better understand the challenges and diversity of Indonesia, which is home to more than 300 ethnic groups speaking over 700 languages, and this motivated her to contribute her talents and experience in communications towards the betterment of Indonesia. With an idea in hand, she knew that she needed to improve some of her skill sets to turn her project, which ties into UN Sustainable Development Goal (SDG) 17, Partnerships for the Goals, into reality. She found just what she needed in the Global Leaders for Innovation and Knowledge program.

I am from Indonesia and I have mostly worked in the advertising industry. The companies I worked for were full-service multinational agencies offering services for all channels; digital, activation, TV, radio, print, etc. I have a Bachelor of Science degree from the University of Texas at Austin and worked for six years in the US before I came home. 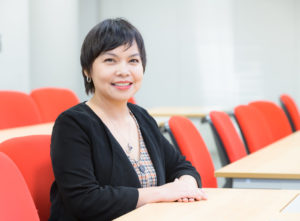 The main focus of the project is the 17th UN sustainable development goal (SDG), which is partnerships for the goals. I want to create a collaboration platform that connects local non-governmental organizations (NGOs) with communication professionals and content creators. In that sense, because communication is cross-cutting, it would help solve a lot of development program issues that relate to behavior change communication, such as education, health, and sanitation.

The platform is like a matchmaking platform where local NGOs can post their needs for a project and content creators and communication professionals can look for projects with social impact. Right now, there’s a disconnect between supply and demand. Only the big development agencies have the access and resources to do behavior change communications. The local NGOs usually only have limited resources, so they are very dependent on the bigger agencies or local government.

Indonesia is a huge archipelago and very diverse. We have more than 17,000 islands, and hundreds of languages and ethnicities. These pose a lot of challenges to development programs in Indonesia. I worked for an international development organization for about a year and that was the first eye-opening experience for me. I realized that outside of Jakarta and Java, there was still so much disparity. And the behavior change communication part that drove the demand for the specific program was not always very well integrated into the planning and implementation of the programs because of limited resources.

An example of where behavior change communication plays an important part is in sanitation. Indonesia has a high number of people still doing open defecation. This is because a lot of people in many areas in Indonesia still don’t think that having a toilet or using one is important. They’ve been using their backyard as toilet for so long, and their parents and grandparents before them were doing that as well, so they don’t see the problem.

But bad sanitation leads to diarrhea, and diarrhea is one of the leading causes of death for children under five. To change that mindset, behavior change communication efforts are needed. And the challenges for the local NGOs in the field is that they have limited capacity and access to resources. They don’t have access to the communication strategists and trainers you will find in abundance in Jakarta, for example, or the content creators, videographers, photographers, and animators—all the resources they need to actually create communication that can convince people why open defecation is bad, why they need to build a toilet and why they need to change their habits. That’s just a very small example.

―How did you hear about the Global Leaders for Innovation and Knowledge program? 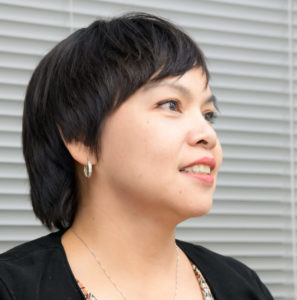 I heard about the program from one of my friends. She’s an alumna, and we used to work together. I’ve had this collaboration platform idea for a while and had been looking for a way to make it more concrete. I don’t have a business background, so I don’t know how to monetize this; and a social enterprise needs to be self-sustaining, obviously. Making profit is very crucial. Otherwise, it’s just going to die.

―What did you know you needed to improve in yourself?

I’m not very good at numbers, and I knew that I was lacking quite a few things. I could sense that if I tried to sell this proposal to someone, they’re not going to buy it, because it would be missing details needed to convince people to say, “Oh, yeah, this is a good idea. I will invest in it.” So, when I heard about this program from my friend, I read about it and thought maybe this could help.

―How has your experience been participating in the program?

―How does the diversity of the program help? 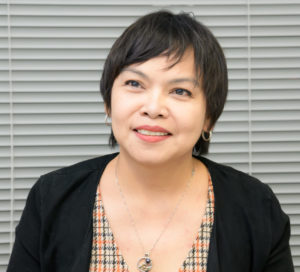 I’ve always been working for a multinational company, so I didn’t think there could be anything different in this setting. But in this program, I had to collaborate with seven other nationalities and each country had different values and different perspectives.

For example, when we went to Singapore, we were divided into four groups. Three groups went together to the exactly same places. Interestingly, the next day, when we presented what we found, each group presented totally different things. We all had our different focuses. That just shows how we see exactly the same thing, but have different takes on it. That was a great discovery.

―What challenges did you face working in such a diverse group?

We had such different ways of looking at things, so of course there were challenges. That’s one of the most valuable lessons. I think because most of us were quite independent thinkers with strong personalities, we could be quite opinionated.

It did come up several times in our group discussions, but I believe the conflicts actually forced us to switch our thinking and see things differently. And then, from conflict, we could go in a totally different direction that was better, that none of us thought about before.

I think, as a leader, you have to know where people are coming from and try to understand their points of view. And you have to remind each other that we are actually heading towards the same goal. I think we did that quite well in the Hawaii project. Four of us were from four different countries, and we did have some arguments. But then, I think it’s because it’s already in the middle of the program, we had already learned to hold ourselves back and to really listen to each other before getting into a heated argument. So, what we had were productive arguments that led us to a better result for our project. And I think that’s very valuable.

―Have you gained anything specific to Japanese culture from the program?

I guess what I admire most about Japanese people is they continuously strive to get the basics perfect and go beyond. I think that’s what made Japan the country that it is—that attention and commitment to perfection and details, even in the smallest things.

My advice would be to have quite a clear goal. Know what you want to achieve in this program. That will help you to be more focused, absorb the knowledge, and see how it could apply to what you’re trying to do. That will help a lot in making progress on your own Capstone project. Also, keep an open mind, because we have so many countries represented here. Don’t think that your way of thinking is the best one, because often it’s not. Lastly, have fun. 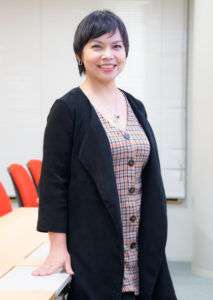 ―Where do you see yourself in 10 years?

After this program, I will go home and will try to get the next steps going
to find potential collaborators. Then maybe we will have a small-scale test to see what the potential users think about it—because what I’m thinking may not be what they need. Ten years from now, I’m hoping I will be working on something that creates social impact. Maybe it’s this Capstone, maybe it’s another thing—I don’t know—because 10 years is a long time, especially in this digital age where everything changes so fast. But one thing for sure, I will continue to strive to make an impact.