The ocean has always been a part of Pratama Yuri Widiyana’s life. A native of Jakarta, he grew up in the city, but Indonesia’s Thousand Islands were nearby. After earning his university degree in business administration, the diver made the islands the center of his business venture and got to know the fishermen who make their living from the surrounding waters. Along the way, he came to see economic potential in an underwater menace and how it could improve the lives of those fishermen and boost Indonesia’s economy. Through the Global Leaders for Innovation and Knowledge program, he found a way to bring focus to his plan that combines technology and sustainable fishing. 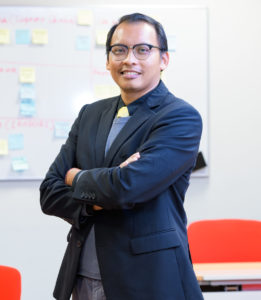 I was born and raised in Jakarta, so I’m a big city boy. I was raised in a big city way. From my first year of college, I knew that I wanted to do some sort of business, so I enrolled in the program for a degree in business administration. After college, it was very challenging for me because, at that time, entrepreneurship was not a thing in Indonesia; and I didn’t know what kind of business I wanted to do.

After some time, I bumped into the tourism industry. I ran a small tour company and we focused on the Kepulauan Seribu islands—which translates to Thousand Islands in English—north of Jakarta. We came up with that kind of small business initiative, bringing tourists to the islands. At that time, it was not as popular as it is now. Most of the islanders work as fishermen or in aquaculture—especially seaweed.

Through the tourism project, I found something that caught my attention. Sea urchins are our enemy as a tour operator, because we are selling the island experience—snorkeling, diving—and these sea urchins are poisonous. But sea urchins can also have economic value, so I thought there could be a good venture there and we tried to involve the community.

My Capstone Project is about creating sustainable fisheries. It has evolved over time. In the beginning, I only focused on the technology. I was using blockchain for a traceability system so that we could know the journey of the fish. But after I started the program, I learned a lot about other aspects that might contribute. It’s not only about technology. That can help, but more important is the connection with the end customer and the fishermen. In my experience, that was missing. So, if we can create a platform that connects them, they can exchange information and know—from the fishermen side—that they are doing the right thing, because the customer is appreciating their efforts to catch fish in a sustainable way. On the customer side, it’s also a good thing, because they know that the fish they buy and consume have a minimum impact on the environment.

I interact often with the fishermen. To some extent, I live with them. I stay in their houses, so I know their daily activities. I know what kinds of tools they use and how much they can get from selling those fish. Their income is not much. They work very hard and actually risk their lives. So, if they do this for me, I need to do something as well.

―How did sea urchins become such a focal point for you? 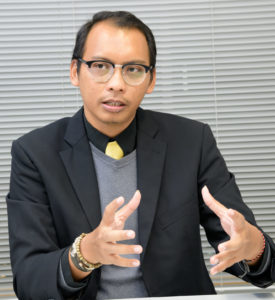 Coral is very important to our economy in Indonesia, so it’s an issue that the sea urchins graze on the coral floor. For us, coral is a valuable asset. And the damage to the coral floor done by the sea urchins really impacts the economy. But there wasn’t much we could do. At the time, we just collected them and buried them in the sand or even burned them. But then something came to mind. Could the sea urchins be eaten? Some of them can be eaten, so my simple thought was that if it can be eaten, it should an economic value.

At the time, however, we didn’t know yet what kind of economic value that would be, so we continued to do some research about sea urchins. We asked experts at research centers and universities. Then there was a funny moment. I was watching a TV series—it’s kind of like National Geographic but is a local show. I rarely watch TV during the day, and I don’t know why I watched that show. But at the end, I was like, eureka! I found what I was looking for. That TV show was actually about sea urchins and how they can have economic value. So, from that moment, it was like, maybe this is a good venture.

We tried to also involve the community, but it was very challenging because, at that time, most of the fishermen did not know how to maximize the potential of the sea urchins. How could it be a good economic commodity? They weren’t sure. So, it was very challenging for us at the time. Only three fishermen joined us at the beginning, and we made many mistakes. But, eventually, we learned what to do and we shifted the business so that we were focused on aquaculture and sea urchins. The tourism has been handed over to the locals. Now the fishermen understood that the sea urchins could be eaten—it’s a delicacy—but still we didn’t know how to produce or package the product, or where to market it. So, there were still many things that we needed to do.

Then we realized that Japan is a very good market for sea urchins. About 90% of the market is in Japan. So, we tried to make a connection with sushi chefs, but that was still in Jakarta. We tried to build relationships with sushi chefs because we learned that, actually, when it comes to purchasing, the decision-maker is the chef. It’s not the purchasing department. It’s not the CEO of the restaurant or hotel. It’s the chef. So, we needed to make that connection.

―How do you get the community involved?

One important factor is that the person who will be the seller in the market is the fisherman’s wife. This is something I found out by living with them. To share a story, there was this one fisherman who we invited to join the group. He said yes, I would love to join the group, and he came to the meeting maybe three times. The next morning after the meeting, we planned to have another short one. We went to the facility, but he was not there. Where did he go? We wondered if he was sick or something like that. Later on, we went to his house to check on his condition. We found that, actually, he was fine. We asked, “Why didn’t you come to the meeting this morning?” He said, “Oh, I’m sorry. My wife didn’t allow me to join the group.” 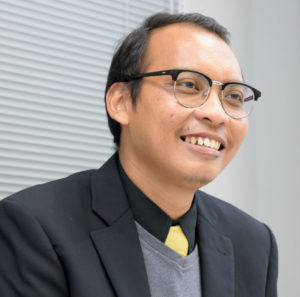 This comes back to the daily economic cycle. His wife was worried that, if he joined the group, he would abandon fishing and just focus on aquaculture, which is long term. She was worried about the house. She was worried about day-to-day life. We learned that it’s also important to engage with wives. But, at the time, we had no idea how to do this. But, from this project, we found out that we can empower them to become the vendor, so they have their own money. The fishermen’s wives can become stakeholders in the project.

During the program, in Hawaii, we were doing a project related to gender equality. It was a very new term for me, but it was very interesting for me and, from that moment, I decided to look for opportunities for women. That’s how the whole program has helped shape the project itself. This helped me shift from focusing just on the technology and instead to think more about people connections—and then also to put a gender perspective into the project. The fishermen’s wives become important stakeholders because they are being entrepreneurs.

―How else can you help the fishermen?

Some of the fishermen who joined our group for aquaculture, but aquaculture alone cannot cater to them in terms of the daily economic cycle, because sea urchins take at least six months to harvests, so it’s impossible for them to rely only on the sea urchin. They need to do fishing activities as well. But when they want to sell their fish, there are limited channels available in the islands. They use good practices for sustainable fishing, but the middleman sometimes doesn’t care about how you caught the fish. I want to help and encourage them and create opportunities.

―How did you hear about the Global Leaders for Innovation and Knowledge program? Why did you apply?

I heard about Global Leaders for Innovation and Knowledge from one of the great alumni who is a friend of mine. He shared a story about the program, and I thought it sounded interesting. I browsed more information and saw that it is a very interesting program which invites many good leaders from various countries. I thought, maybe this is a good opportunity for me to test myself. Maybe I’m in a kind of comfort zone, and I don’t want to be in that position too long. I need a slap in my face. I need something to wake me up, and I think the Global Leaders for Innovation and Knowledge program is one of those opportunities to test myself and my ideas. 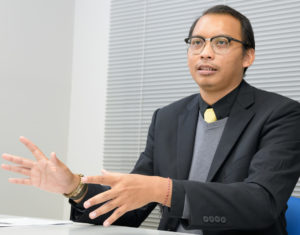 With the type of leadership that I personally encounter in Indonesia, we have business partners. I’m not alone. I’m only like a co-founder. So, the three of us have to come to some consensus about a decision. And I don’t like conflict.
But this program—especially the Hawaii trip—showed me that it’s good to challenge what someone says. If someone has an opinion, it’s okay to go ahead challenge them. Maybe it’s not easy. It’s not an easy style for some of us. But it’s okay. I was not familiar with that level of challenge, that level of critical thinking, so it was very good for me.

―As a leader, what kind of social change do you want to see in the future?

It’s interesting, because the Seribu islands are part of Jakarta, actually, but they are very different from the big-city urban lifestyle. As in India, there is a sort of caste system. But it isn’t based on social structure. Instead, it is based on which island you live on. There are 11 populated islands, and there is like a competition among them. If you ask someone if they are from this or that island and, if you are from another island that is perceived as better, then you will look down on that person.

So, in daily life, in areas like tourism, instead of there being synergy among the islands they are competing with each other. It’s very bad for business. In terms of fishing, they have this zonal kind of thing: you fish there, you don’t fish there. This kind of social construct is not effective. Eventually, I would love to change those perceptions. These people should work together, and I have to empower those poor fishermen.

You have to prepare yourself. It’s very, very challenging. I’m a diver, and Global Leaders for Innovation and Knowledge is like a deep dive. It’s no longer like scuba diving, it’s like going deep and you must challenge yourself. You are in a very new environment in Japan, and then after a month or so you move to Hawaii, and so on. We visit many new environments. You just have to prepare for a deep-dive experience. 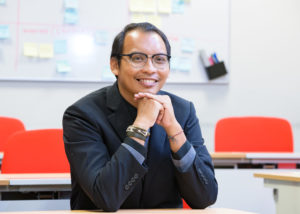