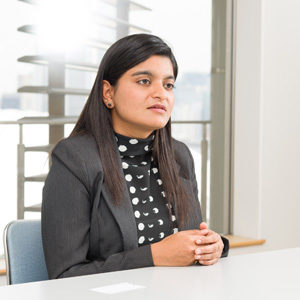 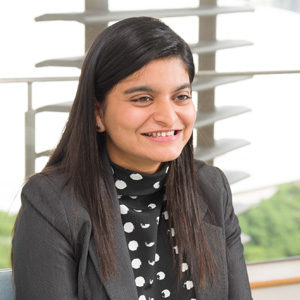 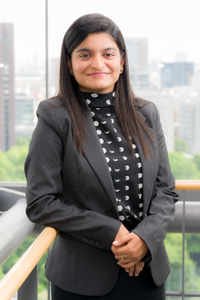 Understand, Outreach then Develop – This is the Key to Problem Solving 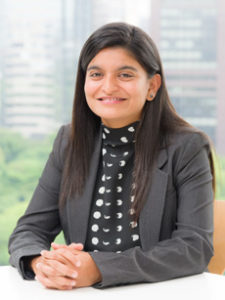 Sonam Rathore just completed the Global Leaders for Innovation and Knowledge 2016 Spring Course. Rathore is currently working as a product marketing strategist with the telecommunications company Alepo Technologies, and her duties involve writing marketing product material, white papers, blog posts, as well as other types of social media content. Rathore has over five years of experience, mostly in traditional marketing, and became involved in digital marketing after completing a master’s degree in promotional media from the University of London.

―What did you gain from the Japan module besides the coursework itself?

In addition to learning about theory on subjects such as global marketing and global HR, we were also exposed to people from different industries, like one professional consultant from Deloitte. This gave us insight that made real-life sense with the theory.

I also learned about teamwork. My fellow mates and I came from 10 different countries. Initially this was very difficult because we were required to collaborate on assignments. The key takeaway in this first module was communication – one has to be very patient when communicating with others because cultures are different, languages are different, and you might be perceived differently.

―How did the Hawaii module challenge you?

We had three different courses over the week while studying there. One day we learned finance, the next day we learned about law, and on another day economics. The challenge here was how to physically and mentally balance the amount of projects we had, which sometimes included three or four projects a week, all the while working with different groups for each.

Although there was a lot of pressure in regards to time management, it turned out that everybody was helping everyone. Thanks to this teamwork, I never felt left alone. The coursework, combined with the presentation for the institution with which we were working, really gave us an opportunity to test ourselves and see how we would perform under pressure.

―I understand that the site visit to the Doi Tung Project in Thailand made a great impression on you. Why was this?

Actually, the site visit to Doi Tung was one of the reasons why I applied for this program. I had read about Doi Tung and wanted to know more, so when I found out that this could be an opportunity that would take me there, I thought this could benefit one of my future goals, which is also related to my Capstone Project.

Doi Tung is a perfect example of the theory of “understand first, then reach out and develop.” It also gave me an opportunity to understand that you cannot do anything in five years; change requires significant time. There are three stages to sustainability: survival, sufficiency and sustainability. Doi Tung has been working for 30 years, and they have just achieved sufficiency; they still have yet to reach sustainability.

But one can see the outcome of the work being achieved at Doi Tung. We observed the locals smiling and saw how the Doi Tung members interacted positively with them. Not only has the project made considerable progress in lifting people out of poverty and improving their living standards, it seems that mental stability or mental health has also improved dramatically. Nobody is running off to a metro city and living on footpaths, which is happening quite often in India because there is no job opportunity in rural areas.

―Why do you think the Doi Tung Project has made such progress?

I would say that the leadership style they took up was the best. It wasn’t about strategizing anything, but actually going out to the people in their villages, speaking to them to understand what was going on, and then coming up with ideas that were not merely spoonfed.

The Thailand module really illustrated that one cannot just give handouts to people. It’s not sufficient, for it cannot sustain them over the long term. Any such program will inevitably fall apart. What happens when you withdraw yourself? Do you want the people you are helping to stay on their feet? Just giving out support does not help in the long term. People have to understand the importance of whatever it is that they’re doing.

One of my classmates asked somebody at Doi Tung, “How do you make a profit? How do you compete in the market?” The employee responded, “We are not profit-focused; we just want to create more jobs for people living in this village.” I think that this is one of the reasons why people who leave Doi Tung to study come back and join one of the businesses. They have something to which they can return.

―How did what you learned in the academic world compare to what you saw practiced in Thailand?

The major difference in theory was “profit,” “profit,” “profit,” and “more profit!” And when we came to Thailand found that there is in fact no profit at all. Management teaches us terms and keywords like sustainability and sufficiency, but somehow the backbone is always profit. However, the keyword in Thailand was teamwork, not profit.

In Doi Tung I witnessed people sitting together and talking. They were not looking for any outcome but just talking, and the outcome came out while they were brainstorming. This was a powerful realization to me. I’m convinced that one should always give an opportunity to people who are on the ground and who know what is really going on first hand. For example, even in the corporate world, if you do not speak to the person who is selling your product, you’ll never understand if the customer even wants it or not. It has to be the other way around. Strategy should be defined after speaking to those people and coming up with something new, rather than just following strategy that has been taught in business schools and the like.

We were involved with many local people and we understood how they worked and what they thought about the Doi Tung project when the project members first came. The villagers told us how there were other NGOs in the past which had set up projects, but they only had drawn up a five-year plan or a three-year plan. They came, built something and then left, but the villagers had no idea how to use it. Sustainability was completely lacking.

Whenever the Doi Tung project members worked at a particular area, they set an example to the other villagers. Thus when they started going to other villages where there was deforestation or other damaging issues, the villagers were happy to accept them because they knew that they were doing good work. Instead of just working, the Doi Tung project members were setting a kind of example for everybody else to follow.

―How would you take the knowledge that you learned in this program, both academic and practical, and apply it in the future?

I’m from a very small town in India but I completed my bachelor’s degree in a metro city. I then started working and went to London on a scholarship and later returned to India. But I never moved back to my hometown. One day I was back visiting my family and I told my mother how nothing had changed over 10 years. I asked her, “Why is that the case?” And she replied, “It’s because people like you never come back.”

That was the realization that we are doing absolutely nothing. By “we” I refer to many of my classmates in school as well as myself, as we have never looked back. That is our fault, for the simple reason that we are sending a message to younger students by saying “the world outside is nicer and it will give you more money.” But if we can do anything, even any small little thing which can give back to society, I think we should start now.

My idea, which has also become the subject of my Capstone Project, is to promote self-sufficiency and sustainability in my hometown through the traditional handicraft of chikankari, which is a kind of royal embroidery. There is a huge gap right now between the people who are working on the handicraft and the people who are selling it. There is generally a middleman who takes a large portion of the money from the sales, and the artisans hardly receive any return. I spoke with a woman who has been working on this handicraft for 40 years and she has even received an award from the Indian government. Yet she confided to me that she earns only 50 rupees a day, which is less than one US dollar.

There is another market gap in the fact that the people who are selling it are only selling it locally. This beautiful art is not known outside my state. This is very sad as chikankari has more than 100 years of history, yet because nobody knows about it, they don’t buy it. And generally whatever you could find outside that state is only an imitation; it will not be the original work.

The biggest gap is marketing. Makers of this handicraft don’t know how to market and sell their product.. The websites are so lousy that nobody goes and buys their crafts online. In India, people are afraid to pay with credit cards online so the majority of them do cash on delivery. So if you have a simple website, you can be sure that nobody will buy your product. Thus the artisans are not able to catch the market when there might be people who want the product but they don’t know how to buy it.

I am not saying that I can eliminate the middleman, but I can create jobs directly in my hometown where I know that people understand the art. It’s just because of the middleman that they don’t get much money, so I can fulfill that role initially and serve as the direct contact. This allows me to apply both the theories I’ve learned and the experience I’ve gained from my professional life. One of the ideas in marketing is to market products directly, and I think this would enable me to eliminate many unnecessary aspects. Then I’ll have a base; I’ll have an example to show others that if you’re making a product then you can sell it as well. I can even be a marketing consultant with local businessmen. I would like to provide even the tiniest amount of opportunity for these handicraft makers if possible.

I used to have a very hard time with the subject of finance but thanks to what I learned in the course, I’m more comfortable with finance and I think I can handle it initially. I also now have a wider understanding of the global markets, not only because of the theory that I have learned, but from the people I have met and knowing what their country is like, what kind of product they like, what I can sell, and what pricing I can give to the products, etc. I think I now have a wider understanding of global opportunity compared to national opportunity.

Basically I just want to implement what Doi Tung is doing. I want to use all the large-scale knowledge to personally set an example. Then I will let my classmates know my ideas and try to get them on board. Rather than just going in and selling my idea back in my hometown, I want to go and speak to the people; they might have better ideas because I have not been there for so many years now. Of course reaching out to the people in the field is exactly the concept which Doi Tung is focused on. The key to learning is to understand, outreach and then develop. Following this principle is really the best way to approach any kind of problem.