Learning to expand access to justice in the Philippines

As a lawyer, law professor and director of a Legal Aid Center in the Philippines, Lauren Rose Rosales Tanyag has witnessed many inequalities in the country’s legal system. Due to the expensive and exclusive nature of the system, poor people in her homeland have little access to adequate legal representation. This puts justice out of reach for many people, who are under-represented in legal disputes and litigation in general. However, while taking part in the Global Leaders for Innovation and Knowledge program, Lauren was able to find out more about legal aid systems in jurisdictions such as Thailand, Singapore, Japan and Hawaii. This helped her develop her capstone project that examined ways of improving access to justice in the Philippines. Lauren believes this work has the potential to greatly improve the lives of the poor in her home country and provide better access to the justice system.

―Please describe what your Capstone Project was and why you feel studying access to justice in the Philippines was important. 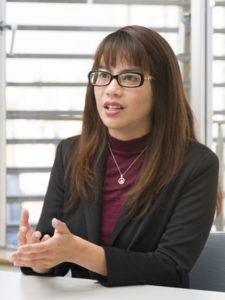 My Capstone Project was about access to justice and the reason I felt that it is very relevant is because this problem is not limited to just one locality. It’s a problem being experienced everywhere in the world. It’s a known fact that legal services are quite expensive and, unfortunately, so many Filipinos are living at the margins of poverty. Through the Legal Aid Center, I am often exposed to people who come to us for help because they lack the means to pay for a lawyer of their own choice. More often than not, they come to us thinking that when they have a problem, they have to go to court. They are not aware that there are so many mechanisms in place under the law that they could take advantage of that would not cost them anything. So that is one of the purposes of my Capstone Project, to educate the people for them to know the remedies that are already available which will not translate to any costs for them. Justice does not have to be expensive, but only if you know where to go and what to look for.

So many people think that the job of a lawyer is to go to trial. When they’re already having problems, that’s when they think of lawyers. But the thing is, not many people realize that we are exposed to the risk of incurring or having legal problems in almost every transaction. As simple as clicking “I agree” in an app agreement could expose you to legal problems. If you’re renting a house or buying a property, you sign a contract and that act could expose you to legal problems too. So access to justice is something that is very relevant in our daily lives.

―How difficult is it for the poor to get proper legal representation in the Philippines?

Oh, quite difficult, because lawyers’ fees, I have to admit, are quite expensive. And, even if we take that out of the equation, the expenses for filing a case in court—the filing fees—are also costly. At every stage of the proceedings, you have to spend money. When you file a case at the lowest level, you have to pay. Assuming you win, if the other party appeals the case, it will be elevated to the next level and again some amount shall have to be paid. Until you reach the highest level, you have to be ready for expenses. Some people have to mortgage their houses just to afford litigation.

The sad reality is, some of them don’t even have to go to court. Right now, the trend is to avail of alternative modes of dispute resolution, like mediation. However, not many people are aware of alternative modes of dispute resolution. Sometimes people go to court just as a matter of principle. They want to teach the other person a lesson. However, if only they have a means to meet and talk—for us to mediate the problem so it does not escalate—that would translate to less expense for them, less burden and trouble, so they would be able to sleep better at night.

―Your Capstone Project refers to women who are victims of abuse but unable to afford the costs of divorcing their partners in the Philippines. Because of this, do you feel women are unfairly burdened by the inequality of the legal system?

I would say not really. I think the burden of the system is shouldered equally. But maybe it’s because many women are still dependent on their husbands. In the Philippines, we are very patriarchal. So, although the number of women who are working or who have careers is increasing, it is still expected that once a woman gets married and has children that she will stay at home and take care of the family. So in that sense, maybe women are disadvantaged. But I would still say that the burden is shouldered by all equally.

―Your project also states that your mission is to “help people help themselves through education.” Can you explain what you mean? 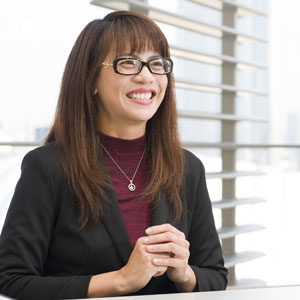 The existing system right now is that we have Legal Aid Centers which provide free legal representation to indigents. However, our only authority under the law is to represent those who cannot afford their own lawyer in court. To put it simply, for trial purposes. However, like I said earlier, there are so many means by which disputes can be resolved without going to court. That’s where this project comes in. I wanted to build a network of Legal Aid Centers, as well as expand its functions so that it would include research, advocacy and education. If we are able to educate the people about the remedies which are available to them to avoid litigation, they would be able to resolve issues or disputes at the earliest instance.

―The program allows you to do field work in four different countries. How did this help your Capstone Project?

I came into this program primarily because I was very interested in the course outline. It’s a mix of the things that I know and things that I have no idea whatsoever about. I am managing a Legal Aid Center but I don’t have any background in management. So that is one of the reasons I joined the program.

―So the hands-on portion of the program is also invaluable?

Yes, because learning should not be limited to the four corners of a classroom. The practical application, for me, is more valuable than just listening to lectures.

―How did interaction with your classmates help you with your project?

The thing about my classmates is that they were very friendly, helpful, and very respectful of cultural differences. They were very aware that there are some things that we handle differently. They were very open-minded. It was quite easy for me to tell them that there were some things I did not understand and that I would need help with. They were always there to give assistance, no matter how small the issue was or no matter how personal. Towards the end, we have become clingy. We treated each other like family.

We have this concept that I learned here, the Y-gaya, which is like a brainstorming session. Y-gaya was very helpful to me and for my project, because I got to hear other perspectives, especially from those who have no background in law. I was the only lawyer in class so hearing my classmates’ perspectives on some of the questions that I posed in my project was very valuable for me to complete it.

Also, I learned about “creating the ba.” Sometimes, we set a specific schedule for Y-gaya sessions so that we could exchange ideas. But other times, it was quite spontaneous. So we learned that we don’t need to have a formal structure to exchange ideas or to communicate about things that concern each of us. We can just simply create an informal “ba.” That was also invaluable.

At first, I thought it was just a place for people to get together and communicate. But throughout the course of the program, we came to understand that it is not the place itself, but actually a mechanism or means in which people can get together to exchange thoughts and ideas.

―Ultimately, you believe your Capstone Project will help improve your community in the Philippines?

Yes, definitely. If only it can be done. I have high hopes. I already spoke with my superiors about it.

While I was in Hawaii as part of the program, I was able to find the Legal Aid Society of Hawaii. We had a course in Hawaii where we had to go to different local places. One of the places we visited was the Supreme Court of Hawaii. At the Supreme Court of Hawaii, they were handing out leaflets and I saw an advertisement for the Legal Aid Society of Hawaii. They provide free service and also programs to educate the poor. So they conduct seminars and simplify the process in words that can be understood easily by those who have not gone through formal education, and things like that. This closely resembles what I want to create in the Philippines. That was also very helpful because I was able to use that as a model of some sort. Not to copy, but to use the good and eliminate the bad in the system, see where there is room to improve.

―If you were to sum up the program into a few words, how would you describe it? 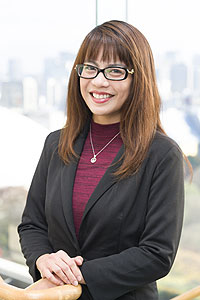 I would say that the Global Leaders for Innovation and Knowledge program is a great learning experience. A learning experience not only in the sense that you get to absorb new knowledge through the lectures and the assignments. But at the same time, it’s a learning experience on how to develop as a person—a person who is not defined by or who is more than his or her profession. More than anything, the interaction with the staff and with my classmates, helped me grow more as a person. I used to feel confined in a box. I was feeling quite closed in. But, the Global Leaders for Innovation and Knowledge program gave me the chance to expand my horizons so that I could see beyond what was just in front of me.