A Long-Distance Approach to Running a Non-Profit

Through his experience on the Global Leaders for Innovation and Knowledge program, Prem gained not only valuable information for leading a social enterprise, but the mental stamina needed to overcome difficulty. Now he and his team are working to expand Malaysia-based non-profit Care2Run to meet the needs of their community.

Prem was a man with a mission well before he came to Japan. Prior to participating in the Fujitsu-JAIMS Foundation’s Global Leaders for Innovation and Knowledge program in early 2017, the former Service & IT Desk Operations Manager turned HR consultant was already involved in the operation of a non-profit organization back in his home country of Malaysia.
Exhausted from a grueling work schedule, and having recently taken up running for recreation, Prem sought to spend less time behind the desk and more time helping his community. In 2015, he launched Care2Run, a non-profit social enterprise with the stated aim of transforming differently abled young people, as well as young people from underserved communities, become tomorrow’s leaders. To achieve this goal, Care2Run would use evidence-based adaptive sports programs.

Prem with his Care2Run Junior Coach

“I dabbled in IT services as an entrepreneur. But while the money was good, I did not get much joy from servicing IT clients,” Prem explains. “I was attracted to different challenges and programs with social impact, and I founded Care2Run to be more fulfilling. It eventually became my calling. The children were genuinely more grateful, and I found that I was doing something both innovative and challenging.”
Care2Run’s approach to sports is less about structured competition and more about self-development and recreation. The organization engages volunteers to act as one-to-one mentors who help young people—including those with autism or even Down Syndrome—improve their overall physical, mental, and psychological well-being. Since its establishment, Care2Run has worked with 35 government schools and welfare homes and collaborated with 16 organizations and partners.

―Inspiring Inside and Out 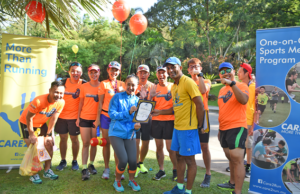 Care2Run volunteers and sponsors at a Care2Run event at Lake Gardens in Kuala Lumpur, Malaysia

Early on, Prem had been splitting time equally between his work as a human resources consultant and Care2Run. This was fitting given that both avenues were furthering his goal of helping people develop. Yet, after witnessing the difference Care2Run was making in young people’s lives, Prem hoped the Global Leaders for Innovation and Knowledge program would help him expand Care2Run and make it more sustainable.
As hoped, he found that he was able to benefit tremendously from the program, which he says developed him both personally and professionally. “Okada-san, who presented one of the special lectures, inspired me with his own program,” recalls Prem. “I really gained deeper insights into how to make an enterprise work—both inside and outside the classroom.”
Naturally, Prem made Care2Run the subject of his Capstone Project, a social innovation model through which students in the Global Leaders for Innovation and Knowledge program create plans to apply the concepts they have studied and observed to address a particular issue.
“I didn’t limit my learning to classroom studies. I took a lot of interest in reaching out beyond class, reaching out to people who could give me better exposure and assist me with Care2Run.”
Elaborating, Prem says: “I was interested in learning about the special-needs education system in Japan. So, during breaks in between studies, I would be messaging someone, calling someone, scheduling appointments, and meeting people over the weekend.”
He ended up speaking with the Autism Society of Japan, going so far as to enlist the aid of his classmate, Ryo-san, for Japanese–English interpretation.
Once the program finished and he returned to Malaysia, Prem decided to allocate just 20% of his time to his HR consulting work and to devote the bulk of his efforts to Care2Run. He promptly set about leading the organization into its next phase, emboldened by what he summarizes as “self-confidence in my ability to make a difference” and “perseverance and a preparedness for uncertainty.”

Care2Run is synonymous to High Five!

Care2Run has indeed expanded, but that’s not to say that all has been smooth sailing. Prem says that most of his organization’s basic plans have been executed, but that raising funds–especially securing large financial backers—has taken longer than anticipated. Care2Run, he says, has yet to achieve a crucial financial milestone laid out in 2017.
While obstacles like this may exist, they are not ones Prem is unprepared to handle. He credits the Global Leaders for Innovation and Knowledge program with helping him develop perseverance and a tolerance for stress and unpredictability. He also says his interactions with the lecturers on the program, and with the Autism Society of Japan, have prepared him to accept that fundraising is difficult.
“Those interactions helped give me a perspective of how tough life would be, and helped me recognize that my journey ahead would not be one that is easy,” he explains. “I just have to learn, adapt, and be open to embracing challenges and opportunities that come my way.”
Perseverance has paid off, and Prem says he has since learned to “become a better storyteller.” This has made it easier for him to explain the concept of Care2Run to potential donors, so they can better understand its mission. He says that he expects to receive the last bit of crucial milestone funding in the near future.
Prem admits that his work is a labor of love, joking that “I may be in a financial deficit, but I’m emotionally positive.”
As an example of the difference Care2Run makes, he tells the story of an autistic child who he has seen become more communicative through sports activities. “When I’m able to witness things like this, it encourages me to discover and do better.”
Care2Run offers the opportunity to make a difference and—perhaps more than anyone—Prem knows that operating the organization is not a sprint, but a long-distance run.